In our increasingly fast-paced digital world, relying on manual processes can mean the difference between outdoing your competitors and gracelessly falling behind.

This is why business processes should be digitized and automated as much as is possible.

In IT and software development, one major thing that greatly benefits from automation is deployment, or the process of getting a new software or an updated feature running properly and available for use to its live users.

Automated deployment is usually talked about in the context of DevOps, a portmanteau of “development” and “operations” which combines and automates processes from both, with the purpose of making the overall development cycle shorter but more efficient, leading to continuous delivery of higher-quality software (more on that later).

In the early days of IT development, deployment originally involved a developer manually uploading updated files to the live server.

But through time, this process has gotten more complicated and more steps were added to the equation, eventually turning deployment into a tedious and repetitive process.

Essentially, automated deployment is one aspect of DevOps wherein the steps that comprise a typical manual deployment process are laid out into one streamlined flow, which a computer can then execute without human intervention.

This significantly shortens the amount of time needed to deploy, lessens the risk of errors being pushed to the live version of the system, and takes away the menial and thankless deployment tasks from developers who would much rather spend their time on more valuable programming work.

If you’ve read up on DevOps, you’ve probably stumbled upon one or all these three terms—what do they mean exactly?

Continuous integration is a practice where different developers working on the same system regularly merge their changes and updates into one central repository, which is then built and tested automatically, making it so that errors are caught early on and fixed before deploying to live.

Continuous delivery is another DevOps practice which consists of continuous integration, plus deploying the build into a non-production environment.

The goal of this practice is to continuously have the new version of the software in a “deployable state”.

Finally, continuous deployment builds on the other two practices, with the added step of deploying automatically to production without any manual input or approval.

Out of the three, this is the fully automated and most “hands-off” process. 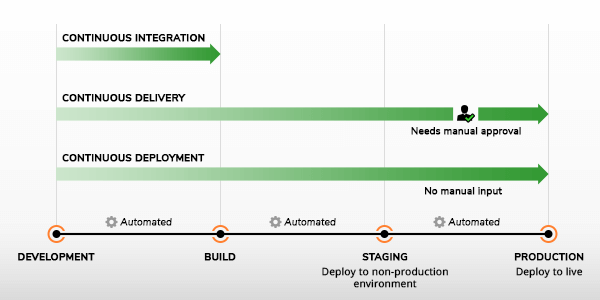 While continuous deployment is the most agile process, the choice of what will work best for an organization still largely depends on its setup.

For example, continuous delivery works for setups where a project manager or another team member needs to validate changes—not just whether the system is working properly, but also whether they fit the client's requirements—before deploying to live.

In this article, we’ll talk about automated deployment mostly in the context of continuous delivery—which, unlike continuous deployment, requires a manual approval for changes to be deployed to production.

The deployment process itself, however, is still automated and typically triggered by just “one click” from a developer or a project manager.

Deployment is what takes the product or feature that you have worked hard for to your actual users that will be paying or benefiting from it.

Naturally, you would want to optimize this process to be as quick and error-free as possible.

Automated deployment empowers you to do just that with the following benefits:

Although manual deployment in itself normally doesn’t take a lot of time, it’s still a series of long steps—effectively hurdles when you’re rushing to get new features live.

Since automated deployment is done at literally the click of a button, you can do far more deployments and be able to introduce new features and updates to your users faster and more often.

Also, since the manual tasks are eliminated, your developers can then move on to working on other updates for the software, enabling you to constantly improve your system.

With manual deployment, even one missed step in the process can result to a system crash or downtime.

This risk especially increases with systems that involve a complicated deployment process that a developer has to remember every single time.

On the other hand, an automated deployment process is a strictly defined series of steps that doesn’t rely on any manual action to be executed (apart from the initial deployment action in the case of continuous delivery).

And if there’s a mistake encountered in a single step, the program automatically halts the process and alerts the developer so the error can be fixed before being pushed to live.

Automated deployment requires some time and resources at initial setup, but the eventual paybacks essentially outweigh the investment cost.

Aside from quicker releases and low risk of errors, automated deployment greatly reduces the tedious manual tasks that can be a pain to your development team.

As a result, they can focus on the more important stuff—like devising better solutions and improving your system’s overall quality.

It’s worth noting that automated deployment works best when the deployed changes are also automatically tested—a setup that gives the most time and cost savings in the long run.

In continuous delivery (and continuous deployment), automated deployment and testing work hand-in-hand to deliver a seamless and streamlined release process.

Learn more about automated testing and its own benefits here.

An automated deployment setup varies greatly from one project to another, since every project typically has different deployment requirements that need to be considered.

Usually, these are affected by factors such as:

We practice continuous delivery in our development projects at 1902 Software.

This means that code changes are continuously integrated on a regular basis, and developers can push code changes to our staging environment in one click.

In between this and live deployment, a QA tester and the project manager reviews that all updates are in order, before finally deploying the new version to live.

If you want to know more about automated deployment, automated testing, or continuous delivery and how it can apply to your software projects, contact us today and a project manager will be happy to discuss these with you.